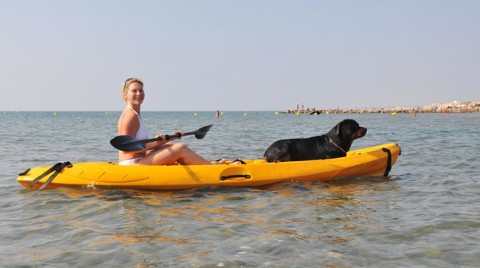 Kayak enthusiasts have a lot to think of when they are getting ready to hit the waters but there is one question many of them find quite difficult to finally answer: can dogs go in an inflatable kayak? After all, an inflatable is perfect for both rough water rapids and for calm lakes and leisurely paddling but can the material endure the claws and paws of a dog?

The Short and Simple Answer

The short answer: yes, all modern inflatable kayaks today can endure a dog sitting in them. This is because they are all regulated by a standard committee that requires all inflatable kayaks to be durable enough for white water rapids up to Class III, meaning they should be able to take a punch from sharp rocks.

This doesn’t mean older inflatable kayaks won’t get punctured. Make sure to read the product description of the kayak you are buying to see if it was made during or after the regulation was made mandatory.

Another important thing to take note of is that there is more than one layer of the materials. Most inflatable kayaks feature two to three layers to ensure that even if one somehow does puncture, there is still several underneath to keep the boat afloat.

Keeping Dogs on a Kayak

So yes, a kayak is built to endure a dog but can a dog ride a kayak without causing too much of a stir? This depends from dog to dog but a little bit of practice and training can go a long way. You’ll want to spend some time getting your dog used to the kayak in the first place.

You can do this by inflating the kayak in your living room or backyard and then train your dog to get in by himself and just sit there. You don’t want a dog to suddenly run around or jump out of a kayak when you’re actually on the water.

When the dog’s gotten used to the routine, go ahead and try taking him out to the waters. Don’t go too far though; you’ll want to see how the dog fares when the boat is moving.

Some dogs get it perfectly on the first try while others need more patience.

Dog treats are going to be your first friend here since they are the best means of training your dog to get used to a kayak. They are your assurance of a properly trained dog.

Now for safety you’ll want to get a PFD, which is basically a lifejacket for a dog. They can be a little expensive depending on the size of your pet but remember: even a well trained dog might suddenly jump out of the kayak when they see other people and other dogs at the shore. Excitement can get the better of them and they’ll be in shock when they jump out and find themselves engulfed in cold water.