If I had to choose between a late night or early morning run, I’d choose late night every time. The air is cooler, the streets are (mostly) empty, and there’s nothing left to distract me.

While running at night can be invigorating, it can also be dangerous. The creeps come out at night, so they say, and it’s harder to see obstacles that may get in your way.

I’ve had my fair share of scares throughout my late-night running years. Here are some tips to make your nightly runs safer and more enjoyable.

Run with a partner or a dog if you can. You’re far less likely to be a target if you’re running with other people.

Ask your friends, partner and family if they’d like to join you on your nightly runs. The bigger the group, the better.

Dogs can be a deterrent, too, especially larger breeds (Runners World recommends running with dogs that are larger than five pounds). But even a smaller dog can offer an extra layer of safety if they’re a vocal breed.

The last thing an attacker wants to deal with is a big dog (which can be dangerous) or a yappy dog (which will wake up the whole neighborhood).

If you can’t run with other people or a dog, try to stick to busier, safe areas.

It should go without saying that you want to avoid running in pitch-dark. If you can’t see the path ahead, you’re far more likely to trip or become a target for attackers.

Runners who wear dark clothing and run along unlit streets are also more likely to be hit by vehicles.

Leslie Barker of the Dallas Morning News explains in this video why it’s so important to wear reflective gear (and she gives some other helpful tips for running at night).

Wear light clothing and reflectors, and choose a route that’s well-lit. Running head lamps are another great option and will illuminate the path ahead.

Music pumps you up and keeps you motivated to keep going – I get it. But those earbuds can also be a safety hazard. How can you hear cars or other dangers if your earbuds are in and you’re playing “Push it to the Limit” on blast?

Ditch the earbuds so that you can hear everything around you. A little peace and quiet will do you some good.

If you must listen to music, put just one earbud in your ear and keep the volume on low.

4. Carry Your ID and Phone

No one wants to think about the worst-scare scenario, but it’s important to face the facts: you take a risk of not coming home each time you go out for a run at night (or any other time of day, really).

The Women’s Running publication recommends carrying an ID on you in case of emergency. If something happens, first responders will know who you are and who to contact.

Don’t forget to bring your phone, too, so you can call for help or a ride home if necessary.

If you can’t deal with bright headlights, consider wearing a cap or visor.

6. Mix Up Your Routes 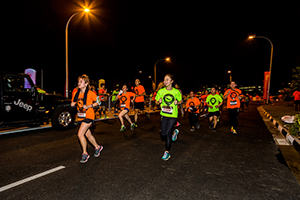 I know how easy it can be to fall into a routine of running the same route every night. You know what to expect, you know where you’re going, and you know exactly how long it will take you to get home.

But taking the same exact route every time you run can be risky. It’s not a fun thing to think about, but attackers often stalk their victims before they make their move.

Running the same route every day gives a potential attacker plenty of time to figure out the best time to attack and where to do it.

Vary your route to keep potential attackers guessing and reduce your risk of running into trouble.

And as PopSugar points out, changing your route can keep you interested in your routine and also help you avoid strength imbalances.

A tree branch here, a few bugs there. You’ll run into (literally) a lot of things when you run at night.

Wear a baseball cap and clear glasses to protect your eyes and head. The bill of the cap or visor will hit tree branches before they have the chance to smack you in the face. And those clear glasses will shield your eyes from bugs and other obstacles you can’t see.