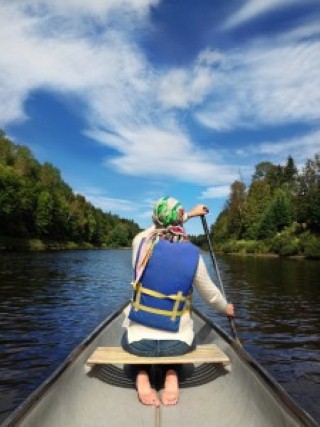 Going out on the waters? Are you sure whether you are getting a kayak or a canoe? A lot of people tend to mistake one for the other and that’s okay because there are a lot of similarities between them. However, depending on what you intend to do on the waters you will need to know which one works best.

Look at the Paddles

One of the first telltale signs to identify one from the other is the paddle design. A canoe traditionally has a one-bladed paddle meaning only one end has the fin. A kayak, on the other hand, uses a two-bladed paddle and the rider has to hold it in the middle.

A canoe’s paddle has a long, slender handle and there is usually one paddle for each side. Some smaller canoes feature only one paddle so you’ll have to go from one side to the next as you make your way forward.

A kayak’s double-sided paddle isn’t really needed for moving forward but is used for controlling direction while moving in rough waters. The double-sided blades allow for quick maneuvering and control.

When you’re in a kayak your legs will be out in front of you, as if you were sitting down on a bed. Your legs will be stretched out and relaxed. Some kayaks will have extra space for another person or a dog.

On a canoe, there are benches and the people riding have to sit or kneel down. There won’t be thigh braces like those find in a kayak – instead you might find a harness. This bench-design allows for several people to sit inside a canoe.

Purposes of a Canoe and Kayak

Kayaks are traditionally for white water rapids. These are the boats you’ll take as you raft down raging waters, swerving past boulders and waterfalls. They’re built to endure the ride.

A canoe is built for leisurely water riding. These are the boats found on peaceful lakes where you can spend an hour or two just paddling by for a romantic evening or for a nice time out fishing.

Some kayaks are adjustable, however, and can be used for both white water rapids and for canoeing on calmer waters. These are mostly inflatable kayaks since they are much easier to adjust and customize.

Picking One Over the Other

With all that said, you could just buy one canoe for fishing and leisurely paddling and then get a kayak for the adventurous rides on rough waters. However, buying two boats might be too expensive and a little inconvenient since you’ll need to worry about transportation and storage.

The best option is to get an inflatable kayak that has customization options. There are convertible inflatable kayaks which have seats and compartments that can be rearranged to turn them into comfortable canoes. They also have collapsible paddles so you can have one-sided or two-sided paddles as needed.

With a convertible inflatable kayak you are essentially getting two boats in one. It’ll save you the money and since they are inflatable you can easily fold them up and fit them in your car.