Hi there, hope you're enjoying the site. We just wanted to let you you know that we may collect a share of the profits if you go on to buy a product after clicking one of the links, images or buttons on this page.

Both archeology and anthropology indicate that the native peoples of Siberia, Alaska, Canada, and Greenland have been using skin-on-frame kayaks for thousands of years to obtain much needed protein for their diets. Consequently, Alfred Heurich, Johannes Klepper, and, Walter Hon all used similar technology combined with modern materials to create their “Delphin”, “Klepper”, and “Folboat” folding kayaks starting in the early 1900’s. However, it was not until Frank Goodman of Valley Canoe Products introduced the first commercially available fiberglass sea kayak called the “Annas Acuta” (Inuit for Pintail Duck) in 1974 that sea kayaking was vaulted to the forefront as a recreational pastime among avid outdoor enthusiasts.

Since then, the sport has grown to encompass a worldwide community of paddlers as well as numerous different kayak manufacturers who each produce a plethora of different types and models of touring kayaks. Therefore, in the article below, you will find information that will help to recognize the different types of modern, touring, sea kayaks as well as to understand the differences between them.

Buyers guide – how to choose the best touring kayak 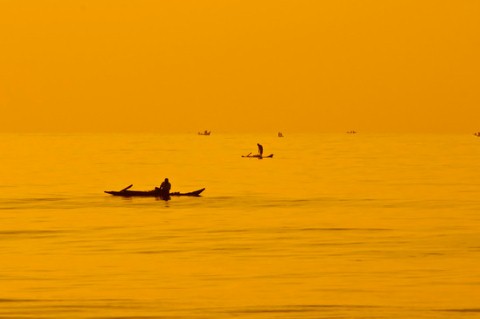 Furthermore, there is the issue of speed versus maneuverability. There again, as a general rule, longer and/or slimmer kayaks are faster and, vice versa, shorter and/or wider kayaks are slower. But, longer kayaks are also more difficult to turn than shorter kayaks whereas, shorter kayaks are easier to turn than longer kayaks. Then, there is the issue of volume. For instance, kayaks with low volumes have smaller cockpits and less load carrying capacity whereas, kayaks with high volumes have larger cockpits and higher load carrying capacities.

Now, the reason that it is important to know and understand all of that is because most paddlers want a kayak that is reasonably stable, relatively fast, and which has enough volume to comfortably accommodate their statures. Also, most paddlers prefer a kayak with a high degree of initial stability when paddling on calm waters and a kayak with a high degree of secondary stability when paddling on rough waters. 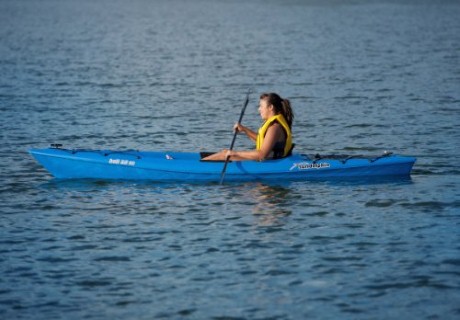 However, beyond that, if  you are planning on day paddling over short distances while exploring the shoreline or exploring marshes and/or swamps, then you may want to choose a touring kayak optimized for maneuverability whereas, if you plan on day paddling over long distances, then you may want to choose a model optimized for speed. There again, if you are planning on using your kayak for day paddling, then load capacity is generally not an issue but, if you plan on using it for extended overnight trips, then load capacity becomes a major consideration.

While some models of sit-on-top kayaks are suitable for touring, sit-inside kayaks provide the paddler with more efficient hull designs as well as protection from the elements. Consequently, sit-inside kayaks tend to be more popular than sit-on-top kayaks for touring purposes. Therefore, below you will find a list of three different models of day touring kayaks that represent both Northwestern and Greenland kayak hull designs.

Wilderness Systems Tempest 170 – Made from rotomolded polyethylene, the Wilderness Systems Tempest 170 is a excellent example of a “British style” touring kayak because it is based on the West Greenland style of kayaks with an upswept bow and a low volume stern with a relatively low rear cockpit rim to facilitate Greenland style rolling techniques and yet, instead of hard chines, it features modified soft chines and a shallow V hull which provide a compromise between the feel of a hard chined kayak and a soft chined kayak.

Therefore, it is not surprising that it won the Sea Kayaker Magazine Reader’s Choice Award for Best Day and Weekend Touring Kayak. With a length of 17 feet and a beam of 22″, it provides a good compromise between speed and maneuverability. However, some paddlers may find that the 22″ beam does not provide enough initial stability to suite them. On the other hand, the narrow beam, combined with the modified soft chines, provides good secondary stability for paddling in rough waters and provides excellent response to leaned turns. Also, it features Wilderness Systems Phase 3 AirPro XP kayak seat combined with an adjustable Slide Lock Foot Brace System and adjustable, padded, thigh braces for all day comfort and superior control.

Plus, it features a TruTrack skeg system to help keep you on course in cross winds and currents. Last, if features sealed bulkheads both fore and aft of the cockpit along with sealed deck hatches in the bow and the stern to allow access to the dry holds and a smaller day hatch located just behind the seat for keeping small items close to hand.

Necky Chatam 17 – Made from either fiberglass or carbon composites with fiberglass seams, the Necky Chatam 17 is another excellent example of a British style West Greenland kayak. While it too features the upswept bow, low volume stern, and low rear cockpit rim indicative of West Greenland style kayaks, it also features a most unusual hull design.

Best described as a hybrid cross between a soft chine and a hard chine hull, the hull of the Necky Chatam has hard chines in the center that transition sharply to soft chines forward and aft of the cockpit. Thus, it has excellent stability for a kayak with a 21.5 inch beam and quick response to leaned turns. In addition, the 17 foot length, combined with the narrow beam, make it a very fast touring kayak. Plus, the low decks minimize the adverse effects of wind. Consequently, in addition to being an excellent touring kayak, the Necky Chatam 17 also excels in navigating surf zones and rock gardens.

In addition, it features Necky’s highly ergonomic touring kayak seat, adjustable thigh braces, and adjustable foot braces for superior comfort and control. Plus, it also features a retractable skeg controlled by a slide mechanism located on the starboard side of the cockpit connected by Necky’s kink-free Necky Wire. Last, it features a sealed bulkhead both fore and aft of the cockpit with sealed hatches in both the bow and the stern to allow access to the dry holds as well as a day hatch located behind the seat.

Seaward Tyee Made from either fiberglass or Kevlar composites with fiberglass seams, the Seaward Tyee is a prime example of a Northwest Alaskan style kayak. With an upswept bow reminiscent of the native Davis Strait kayaks, it has a much higher volume bow than Greenland style kayaks as well a higher volume stern. In addition, it features a shallow V hull and soft chines for the feel that is indicative of this style of kayak. Also, with a length of 17 feet combined with the 24 inch beam, it is a relatively fast kayak with a relatively high degree of initial stability that most beginning to intermediate paddlers prefer.

Furthermore, it features a molded and padded seat and backrest combined with molded thigh braces and adjustable Sea Dog foot pedals which control the Smart Rudder System to help keep you in control and on course in high winds and/or strong currents. Plus, it features sealed fiberglass bulkheads both fore and aft of the cockpit along with sealed hatches that allow access to the dry holds for carrying camping gear. Last, if also features an elaborate deck bungee system with recessed deck fittings to minimize spray.

So, thanks to Frank Goodman and the Annas Acuta kayak, modern kayak touring enthusiasts now have a wide range of kayak types, styles, and models to choose from ranging from sit-on-top models to Northwestern and Greenland style models. In addition, there are petite, low volume, touring kayaks for paddlers with small statures as well as large, high volume, touring kayaks for paddlers with large statures and/or for those paddlers who require copious amounts of gear storage space for extended expeditions. Also, there are inexpensive touring kayaks made from rotomolded polyethylene and more expensive kayaks made from fiberglass, carbon, or Kevlar. So, regardless of whether you are simply wanting to spend the day exploring the nearby shoreline or strike out for parts unknown, there is a touring kayak for you.