A Short History of the Kayak 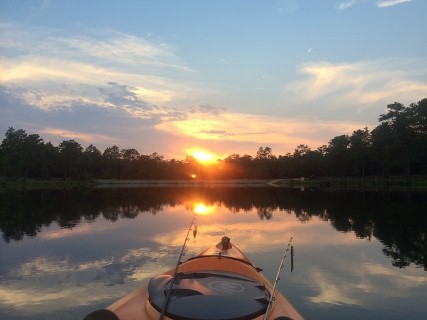 The kayak is a watercraft with a long history in North America. Kayaks were in use at least 4,000 years ago by the native Inuit, Yup’ik, and Aleut peoples of the high Arctic from what is now western Alaska to Greenland. The word “kayak” comes from the Inuktitut “qajaq” and means “man’s boat” or “hunter’s boat”. They were small, narrow boats that were propelled with double-bladed paddles and used to hunt and fish on inland lakes, rivers and the coastal waters of the North Pacific Ocean, the Bering Sea, the Arctic Ocean, and the North Atlantic. The original kayaks were built by stretching a stitched cover made from seal or other animal skins over a wooden or whalebone frame. Seal bladders filled with air were tucked into the fore and aft sections of the kayak to provide buoyancy.

Although large craft with two or even three cockpits were used by some native groups, most kayaks were small one-person boats built by the hunters who used them. A distinct feature of the kayak still seen today in sit-in type boats is the covered watertight deck and cockpit just large enough for the paddler. The native paddlers wore a special jacket that could be lashed to the edge of the cockpit for a waterproof seal. Modern paddlers often use a spray skirt of stretchable waterproof synthetic fabric that fits around the cockpit rim and wraps tightly around the kayaker’s body. This keeps water out of the boat and allows the whitewater kayaker to roll upright after capsizing in the maneuver known as the Eskimo roll.

Kayaks have departed from the original design, but retain the same name, basic outline shape, and size. Kayaks are still most commonly powered by double-bladed paddles, but some models have foot-powered rotational propellers or flippers, and others can be sailed or fitted with a small electric motor. Modern kayaks are usually made from rotomolded plastic, inflatable vinyl, fiberglass, Kevlar or wood, and are designed for recreational activities on inland flat waters, bays and coastal waters, and whitewater rivers.

Single and tandem cockpit designs are common. One major departure from tradition is seen in the sit-on-top kayak, which has an open hull that leaves the paddler’s lower body and legs exposed and free rather than tucked inside a closed bow. Sit-on-top boats do not have a cockpit in the traditional sense and cannot be fitted with a spray skirt. These boats tend to be used in warm climates and waters, and except for specialized models, are more suited to flat-water paddling conditions.

The affordability and ease of use offered by modern recreational kayaks have made paddling into a very popular pastime among people with access to a suitable body of water. Kayaking is a fun, safe and relatively low impact activity, but it can be turned into a very good form of exercise. A kayak can support sightseeing, fishing, exploring, photography, bird and wildlife observation, family fun or simple outdoor relaxation.