Hi there, hope you're enjoying the site. We just wanted to let you you know that we may collect a share of the profits if you go on to buy a product after clicking one of the links, images or buttons on this page.

Novice anglers tend to believe that they will have to spend a fortune for their first kayak. Although kayaks that are in the higher price range can have very impressive features such as sealed compartments, quick-lock adjustable footbraces, adjustable seats, and even mounting systems for GoPro cameras, the truth is that you can get a cheap fishing kayak without the bells and whistles for a budget price.


These days, you can get a good quality fishing kayak for a pleasingly affordable price.  Of course, you should manage your expectations given your limited budget for a kayak.

With a fishing kayak that’s worth less than five hundred bucks, you should understand that you won’t be getting one that you can customize, or something that is 15 feet long. Generally speaking, the shorter the kayak, the cheaper it is. For a budget of under five hundred dollars you should be able to get one that has a maximum length of 12 feet.

You can find cheap fishing kayaks online, in online stores like Amazon and Ebay. You can also check out the websites of reputable kayak manufacturers like Old Town, Lifetime Sport, and Sundolphin. You can also look for fishing kayaks priced lower than 500 dollars in traditional sports and recreation brick and mortar stores.

That said, here are five kayaks that you might want to check out online. 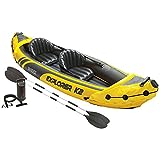 Intex Explorer K2 Kayak, 2-Person Inflatable Kayak  – This is a really cheap kayak for fishing that you can get for as low as a hundred bucks online. Its low profile makes it a great companion in traversing lakes and mild rivers, and its sporty graphics make it very visible even from a distance.

This kayak comes with a removable skeg, a couple of aluminum paddles, two adjustable seats with back support, plus a dual action air pump. There’s also a repair kit included in the product package, and a carrying bag to boot.

This kayak inflates and deflates quickly, in as little as five minutes.  When sitting inside, you would be impressed with its sturdiness that you won’t ever think it would tip over. And it has enough space to comfortably sit guys standing more than six feet tall. Moreover, it’s also stable enough to be used for a solo kayak although putting your stuff in the front is recommended to help set off the weight.

Sea Eagle SE370K_P Inflatable Kayak with Pro Package – This 12-feet long kayak has a maximum weight capacity of 650 pounds, which means it can sit up to 3 persons comfortably. It’s lightweight at just 32 pounds, so you don’t need all three people to transport it. You’ll be able to inflate/deflate it in as short as eight minutes.  The seats are reasonably comfortable,  and you’ll love that the front and rear seat are removable.

It features a thick, Polykrylar hull, inflatable spray skirts, and an I-beam construction floor for added rigidity.  There’s also a self-bailing drain valve which should come in handy if you bring this to the ocean or whitewater rivers although it can handle whitewater up to class III only. There are also a couple of skegs for tracking and speed at the bottom of this kayak. 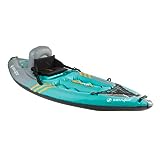 Coleman Quikpak(TM) K1 1-Person Kayak – This is a kayak that is intended for solo use can be had at a budget to mid-range fee. You’ll find this kayak in various online stores.
This inflatable kayak folds up into an integrated backpack with shoulder straps. You should have no problems setting it up, as you’ll be able to do so within five minutes. Once you’re done fishing, you can put this inside the trunk of your car.

When you’re in the waters, you’ll be able to paddle more comfortably thanks to the kayak’s design that lets you stretch your legs. There is a cargo net on the front where you can place your food and gear. It’s rigid floor and three-chamber design should keep the boat secure while in the waters. You will also have peace of mind knowing that this kayak has an airtight system that is guaranteed not to look.

This eight feet long kayak can hold up anglers weighing as much as 400 pounds.

Advanced Elements FireFly Inflatable Kayak -This entry-level kayak works best for people who are just getting their feet wet as an angler. The price won’t burn a hole in your pocket, as it low to mid-range yak.

This kayak has a length of nearly eight feet, and a width of 35 inches. It can accommodate anglers weighing as much as 250 pounds.  It is very portable, that you can carry and bring it to the trunk of your car and store in a closet at home.

Stability isn’t a problem with this kayak as its fixed rigid forms enable it to cut through the waves, and there’s enough legroom even for guys standing six feet tall.

Aside from the kayak, you’ll get a carrying duffel bag and a repair kit when you order this online. There’s no paddle included, so make sure you have a paddle that’s long enough to propel and steer this lightweight kayak. 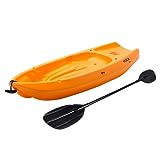 Lifetime Youth Wave Kayak with Paddle – As its name suggests, this kayak with paddle is designed for use of kids aged five years and above. It can accommodate kids who weigh as heavy as 130 pounds. Don’t worry about the safety of your child while in the waters, as the wide stance of this kayak provides a very stable paddling platform. Your child should have no problem exiting and entering the kayak, thanks to its sloped back end.

This kayak is not an inflatable type, which means you won’t have to spend a lot of time inflating or deflating this kayak. It is also equipped with an appropriately sized paddle which your child should have no problems using. This green colored kayak is also easy to spot.

The lack of backrest may turn off you a bit, but remember that this is a kayak that is intended for the little ones and who are unlikely to spend hours kayaking.

As you have learned from the reviews above, getting a kayak for less than 500 bucks is not a difficult task at all to accomplish. These days, many manufacturers have come out with very affordable kayaks that are intended for novice anglers, with very basic features and sans the bells and whistles you’d find in more expensive kayaks.
Of course, price should not be your sole basis in choosing a kayak. There are other things to take into consideration such as the quality, number of seats, storage space, propulsion, and dimension. 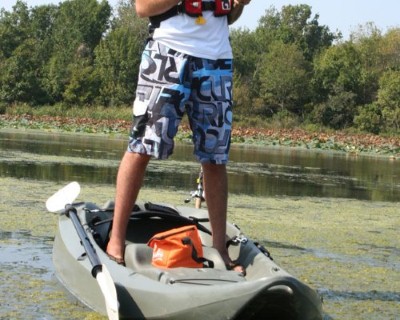 Although it is very tempting to buy a cheap fishing kayak, you’d still have to consider other factors like the size of the intended user. If you’re buying a kayak for yourself, you naturally have to take into account your height and weight.

Large guys usually feel crowded and restricted when they are on a small vessel. Getting a large craft, on the other hand, for a small person isn’t recommended because the guy may find the vessel difficult to operate.

Since you’ll be spending a considerable amount of time for fishing trips, you will also have to find a kayak with comfortable seats. You also need to determine if you want a kayak that has you sitting on top, or sitting inside. The former gives you more storage space although it can be uncomfortable if you are tall.

The best kayak for the money is one that is adequately sized for you and another rider should you intend to go kayaking with another buddy. It should  be lightweight, with comfortable seats and sufficient room for your things.  Also, you have to take into consideration the build quality as you would want a kayak that won’t easily tip over.